A Brief History of the Three Piece Suit

As with most things historical, it’s difficult to accurately plot out a definite evolutionary line from fig leaf to saccaggi suit. Nonetheless it’s never a waist of words to go through some less-known and practical facts about how and why you wear your best.

Regardless of how you feel about Genesis, it’s intriguing to think that man remained naked only so long as he was innocent. The moment he knew good from evil he covered his nakedness, and the fashion industry was born.

Examples of ensembles can be seen in the earliest of art works, and with humanity’s progress towards more complex societies clothing became an increasingly important form of communication.

Speeding through some fascinating though convoluted history to the precursors of modern suits; A long jacket and pants (along with a ton of other fluff) were considered civilized dress in much of Europe as far back as the 1500s. The waistcoat was added to the repertoire on the 7th October 1666 by Charles II, and marks the formal origin of the modern three piece suit. Similar has always been a way to distinguish yourself, particularly from the toiling masses, and there’s no doubt that the highly ornate court fashions of the baroque period made tea drinking an extremely taxing task. 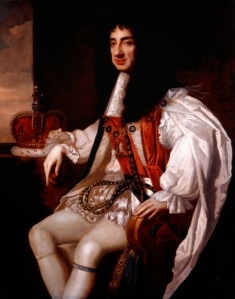 Some suggest that as a result of the political unrest in Europe during the 18th Century (like the beheading of the monarchy in France, for example) the aristocracy attempted to distance themselves from the stereotypes of self indulgent, useless gluttons. The foppish lace, embroidery and flamboyant cuts of court couture were rapidly and radically replaced during the 1800s. This was also influenced by the slow rise of the ‘middling sort’ who needed distinguished clothes that they could still work (i.e. play polo) in. The suit which appeared as a result of this trend was, and still is the very epitome of a gentleman.

(A portrait of Beau Brummel and his statue in London. blog.austinreed.co.uk)

The Dandy Movement and Beau Brummel in particular (late 1700s to early 1800s) is widely considered responsible for the invention of the modern suit silhouette, which is really what we should be discussing in this post.

The Industrial Revolution of the 1800s contributed to the modern suit in two important ways. It first led to the rise of a new species of wealthy clothing purchaser; The Businessman. Who could both afford tailoring formerly reserved to the upper class, and needed a uniform to signal his position in society. This uniform which exuded wealth, also needed to be practical and comfortable, so its form and silhouette became sleek and flowing. It’s no question that the modern suit still signals business, as well as wealth.

Second the invention of the sewing machine brought mass production to a new level, allowing styles to be easily disseminated to a far broader consumer base. This helped to percolate the silhouette of suits that not only worked with the widest range of body shapes, but was also the easiest to produce en mass. Again, no seeing person can deny the influence of this factor in modern suits.

So what is this silhouette thing anyway?

The silhouette is the overall shape formed in your mind when you think of a suit. And as with everything in life, it’s influenced by our fantasy of the perfect body.

The Adonis body that we spend so many tedious hours achieving in the gym, the photoshoped version of masculinity splashing the covers of men’s lifestyle magazines, the bio-engineered hourglass form of a human, is indeed the ideal shape that every suit is aiming – in one way or another – to achieve. This silhouette is then by implication the shape that a good suit should be giving you, if it’s worth parting with money for. But how exactly is the suit supposed to be doing this?

Or you can skip around to other posts in this series

Basic Suit Fit: “Do these pants make me look fat?”

Made-to-Measure Suits: “We have ways and seams”

Bespoke Suits: “Your wish is my Command”

There’s so much info out there that there’s really no way I could give a meaningful list of additional sources, just google it.

My favorite article was

And my favorite video was

4 thoughts on “What’s in a Suit? “Let there be light [coloured fabrics to cover the body]””